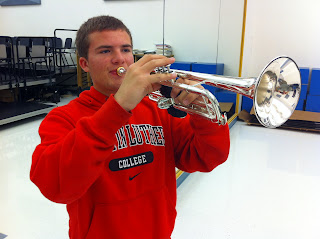 Jonathan Witte, WLA class of 2013 (and my son), was selected by audition last spring to play trumpet in the 2011 Wisconsin State Honors Band.  The Wisconsin State Honors Music Project was founded in 1967 to provide musically talented students the opportunity to rehearse and perform with the nation's finest conductors in a professional, highly disciplined setting. Students who are selected to perform with the State Honors Music Project (instrumental or vocal) are some of the most accomplished instrumentalists in the state of Wisconsin.  Jonathan is only the second music student in WLA's history to be selected for State Honors Band, the first being Tom Otto on trombone in 1997!  Selected through a rigorous audition process, students are challenged to perform at their musical best throughout the short rehearsal period (a three-and-a-half day summer camp at UW-Green Bay this past July), which will culminate with a performance as part of the Wisconsin State Music Conference on Thursday, October 27, 2011 at 4:30 PM. at Overture Hall in Madison, WI. The resulting performance is certainly a once in a lifetime experience for performers and audience.  Tickets for the concert are available at http://overturecenter.com/production/wsma-state-honors-concerts.
Posted by Unknown at 8:23 AM No comments:


This afternoon there were about 20 professionals who came into WLA and gave presentations on their career areas to the WLA student body. Heather Lynn, WLA 98' grad and Country music singer/songwriter, spoke to music students about Music Performance as a career.  I'm very proud of Heather and her hard work seeing as she is a former music student of mine!  You can follow her Facebook Heather Lynn fan page or listen and buy her music on iTunes (she's got five singles there!) or Reverb Nation.  You can send her fan mail at misslynn@heatherlynnmusic.com or contact her for booking at hle@heatherlynnmusic.com.

While every music performer's path from "unknown" to "star" is different, Heather Lynn shared with WLA students about how she followed her dream of becoming a Country music singer/songwriter. Some of the websites she mentioned were:

Academy Kids and AK Band student registration for MLC Choralfest 2011.
Posted by Unknown at 9:41 AM No comments:

Where was the Apostle Paul's shipwreck on Malta?

I'm presenting the final chapter of Acts in chapel tomorrow at WLA and have been pouring over many sources, including the NPH People's Bible on Acts (did you know they are published on Kindle and Nook now too?), trying to understand Paul's trip to Rome in chains around 62 AD. Acts 27 records that his ship of 276 people ran aground on Malta. I discovered earlier today that there is a St. Paul's Bay on Malta and that many people believe Paul's ship ran aground there near St. Paul's Island.  Interestingly enough, the coat of arms of St. Paul's Bay has a snake on it and has the motto "In Christo Renati Sumus".

Then I stumbled upon a video and article from Christian Broadcasting News "Searching for Paul's Shipwreck on Malta" which purports that Paul's shipwreck was actually at St. Thomas Bay on the eastern side of Malta (for all the doubters in the crowd, I suppose). Which is true? I don't know and, truthfully, it doesn't really make any difference. All I know is that the Bible is God's Word and it is true. Whatever it says is what I believe.  If it doesn't say, I don't need to know it to get to heaven.  So why am I looking into where the shipwreck was?  I'm just trying to understand sailing on the Mediterranean and where Paul sailed on his trip to Rome to try to gain insight into Luke's account in Acts.  Plus Malta looks like a place I'd like to visit someday!

Posted by Unknown at 9:26 PM No comments: