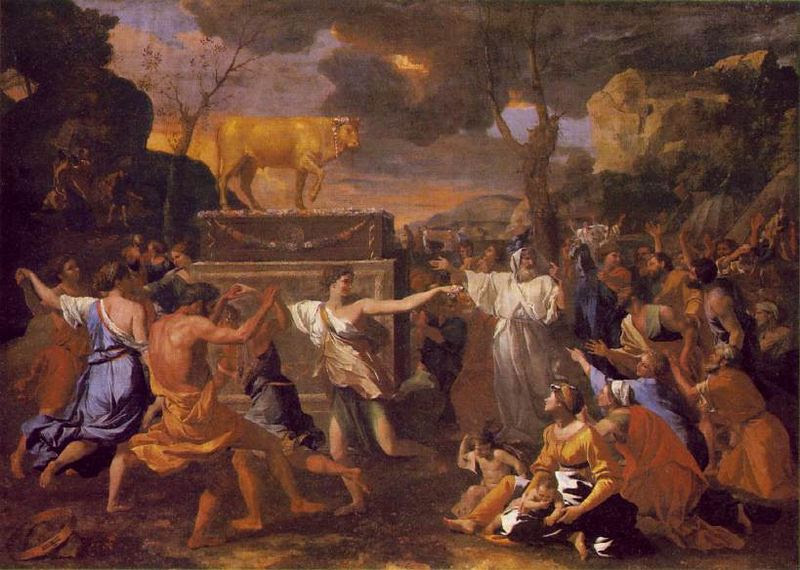 Moses and the Children of Israel had been saved from death at the hands and spears and arrows and hooves and wheels of the charioteers of Egypt. They witnessed God working on their behalf by drowning Pharaoh and his army in the Red Sea. And they sang and danced and celebrated and rejoiced. But then...

They grumbled. They quarreled. They got impatient.

Quail? We only have quail to eat?
Moses! Did you bring us out into the desert to die?
Water! Give us water to drink!
Where's Moses? Why hasn't he come down from Mt. Sinai yet?
So the Children of Israel went to Aaron, Moses' brother, and asked him to fashion an idol of the god who brought them up out of Egypt. So Aaron did as they asked, fashioning the Golden Calf for them–a false god. And then they worshipped it. A false god. And they sang, and they danced. That's what Moses heard. The Israelites singing to the Golden Calf.
Doesn't that sound like us? When we think God isn't listening, when we think he isn't working fast enough in our lives, we take matters into our own hands and do what we think best, but sometimes it's not what God wants. There is a way that seems right to a man, but in the end it leads to death. (Proverbs 14:12)
Doesn't that sound like us? Sometimes we sing songs with lyrics that are so bad that it's basically like we are worshipping a false god. And sometimes we don't even realize what we are doing. A great example of this happened this week at WLA. A volleyball player came to me asking if she could use the Music Tech lab to cut some warmup music for the volleyball team. What she was doing was cutting out the "bad" parts of the lyrics so they wouldn't be heard, even if the "cleaned up" version of the song had already bleated out the bad word. She was doing the right thing!
May God help us, through His Spirit, to realize that the words we sing either praise and glorify Him, or they don't.
Posted by Unknown at 12:38 PM 1 comment:

21 Miriam sang to them: "Sing to the LORD, for he is highly exalted. The horse and its rider he has hurled into the sea."

It's still right after the water has crashed down on Pharoah's armies as they tried to pursue the Children of Israel through the Red Sea. All night long, the Israelites marched through the Red Sea on dry ground in between two massive walls of water that God piled up on both sides of them. You might ask, "I thought God is a loving God...how can he kill all the members of Egypt's army?" The answer lies in the previous chapter: "But I will gain glory for myself through Pharaoh and all his army, and the Egyptians will know that I am the LORD." (Ex. 14:4)

God deserves our glory. God deserves our praise. We didn't make ourselves–he created us. The Israelites didn't push the water out of the way themselves, nor did some weather anomily cause the Red Sea to temporarily run dry up–God parted the waters.
Miriam is described here and elsewhere in the Bible as "the prophetess" and "Aaron's sister", but she is also Moses' sister as well. Other prophetesses of the Bible are Deborah, Isaiah's wife, Huldah, Noadiah, Anna, and Philip's daughters. After witnessing the miracles of the water of the Red Sea being walled up, the sea bottom being turned into dry ground, the safe passage of the millions of people and animals crossing from west to east into the Sinai Penninsula, and the drowning of over 600 charioteers in Egypt's army, Miriam grabbed a tambourine and led all of the women of the Children of Israel in celebration of singing and dancing, which was quite common after a victory in battle.
What can we learn from Miriam's singing?
Posted by Unknown at 11:00 PM No comments:

The Song of Moses and Miriam

1 Then Moses and the Israelites sang this song to the LORD :
"I will sing to the LORD,
for he is highly exalted.
The horse and its rider
he has hurled into the sea.

The Children of Israel have just left Egypt after 430 years in captivity. Moses has already gone to Pharaoh and said "Let my people go!" God led the Children of Israel to the Red Sea with a pillar of cloud by day and a pillar of fire by night. They camped by the Red Sea near Pi Hahiroth, between Midgol and the sea, directly opposite Baal Zephon. (Ex. 14:2) as Pharaoh's armies approached in chariots from Egypt.
All the Children of Israel could think was that they were going to die in the desert at the hands of Pharaoh's armies and that they were never going to reach the Promised Land. But Moses assured them that the LORD would fight for them--they only needed to be still (sounds like Ps. 46:10, doesn't it?). We all know the rest of the story: Moses stretched out his hand over the Red Sea and "all that night the LORD drove the sea back with a strong east wind and turned it into dry land." (Ex. 14:21) The Israelites marched through on dry ground with a wall of water on their right and left.
Pharaoh's armies pursued them, and all the horses and chariots and horsemen followed them into the sea. Then God fought for the Israelites. He made the wheels of the chariots come off. He threw the Egyptians into so much confusion that even they knew that God was fighting for the Israelites. At daybreak, after the Children of Israel were safely on the other side, having been protected all night long by the angel of God, Moses stretched out his hands and the water of the Red Sea came crashing down on the Egyptian army, drowning them all.
What follows in Exodus 15 is known as the Song of Moses and Miriam (his sister). It is the joyful response of an entire nation of people who witnessed their salvation and the wonders of God. It is a good example of the "new song" that we are encouraged to sing to the LORD. When God surprises us with His grace, mercy, blessings, and deliverance, our natural reaction should be to sing to Him and praise His name for all his wonderful acts. We certainly don't deserve any of them.
Posted by Unknown at 9:12 AM No comments:

27 Why did you run off secretly and deceive me? Why didn't you tell me, so I could send you away with joy and singing to the music of tambourines and harps?

The setting of this passage is the end of the story of Jacob fleeing from his brother Esau because, fourteen years earlier, he had "stolen" the birthright from his older brother. For the past fourteen years Jacob has been living "up north" in Haran (Paddam Aram) with his uncle Laban, working off seven years each for Leah, whom he was tricked into marrying, and Rachel, whom he had met at the well when he first came to town. Now, after marrying both sisters and having all his flocks increase, much to the anger of his uncle Laban and Laban's sons, Jacob was fleeing from Haran at God's command.
It's been three days since Jacob fled south from Haran with all his children and wives on camels and all his flocks. They've crossed the Euphrates river and are southeast of the Sea of Galilee in a fertile hilly region. It's there that Laban finally caught up with them and says what is recorded in Gen. 31:27: "Why did you run off secretly and deceive me? Why didn't you tell me, so I could send you away with joy and singing to the music of tambourines and harps?"
Why was Laban not singing? His grandchildren and daughters were "carried off...like captives in war." He wanted to kiss his grandchildren and daughters good-bye. There was no reason to be happy, to rejoice with singing.
Is there an application for us? Singing is a way to show happiness. The music and singing of Haran was accompanied by tambourines and harps. Is anyone happy? Let him sing! (James 5:13)
Posted by Unknown at 8:37 AM No comments:

Why do we sing?

Some of the most important lessons that kids learn in school are the lessons that are "caught" rather than "taught". As I planned for the beginning of the 2007-2008 school year and thought about what I wanted my choir students to know about singing, I thought about all the Bible passages that talk about singing. I want my kids to know that music is a gift from God for all His children. I want them to know that God has placed a musical instrument inside their bodies (their voice!) that He wants them to use. And so I started looking up all the passages that have the word "sing" in them. And I made a list–and I was amazed! There were enough "sing" passages for one-a-day for the entire school year and then some. In fact, if I broadened the search to "sang", or "song", the list of passages from God's Word gets even longer.
So, I made a decision which embarrassed me. I want to start each rehearsal this year with a passage from God's Word about singing. I was embarrassed because isn't that what I should have been doing for the last 16 years anyway?
I'm asking each student to do the following when their turn comes up:
Yesterday was the first day of doing this and each of the three students who were up for the day did well, but what I wanted to do ahead of time (each morning) was to prepare for their passage in the same way as I asked them to prepare. So, that's what I'm doing today: reading Genesis 31:27 and Exodus 15:1 and blogging on them.
Posted by Unknown at 8:15 AM No comments: