PT Room "A Place of Miracles"

Dave Wege gets up REALLY EARLY every morning.  This morning he wrote and sent another picture of Josh cranking off 50 pushups: 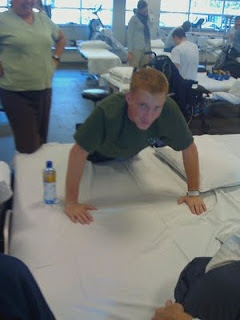 I had a couple of thoughts for you this morning.  First and foremost was thanks again for all of your work.  We have received many cards that tell us your blog is the place people go to keep posted on Josh's progress.  You're doing good work, and the positive, Scriptural tone of your blog serves as a great advertisement for our joy in the Lord.

The astronauts we met (was it only yesterday?) were Pat. G. Forrester and Christer Fuglesang (Sweden).  Josh was given signed photographs and a miniature flag that flew aboard the United States Space Shuttle Discovery that went to the International Space Station August 28-September 11, 2009.  These two men spent quite a bit of time with each service member in the PT room.  When they heard Josh was almost finished with his session, they made sure to come to see him before he left.  That was very gracious!

Volunteers and talented, dedicated therapists make that PT room a place of "miracles."  A man named Tom, a double-amputee in Korea, comes to the center at least once a week. Many people know him for years before realizing he lost both legs.  His positive demeanor projects an incredible "can-do" attitude. A man named Bert, who signed up with 22 other football players on December 8, 1941 to fight in the Second World War, is also a real treasure.

We saw many, many wounded warriors, some with incredible injuries, who have not been destroyed by the turn their lives have taken.  They are nurtured by the staff and the volunteers and shown how to rebuild their lives.  I wish every American could visit Walter Reed or any of the other care facilities for our veterans.  What a ripe mission field for Josh, who truly understands the reason for the hope he has. I know I have a knew appreciation for the spirit, courage, and value of each of these special Americans.