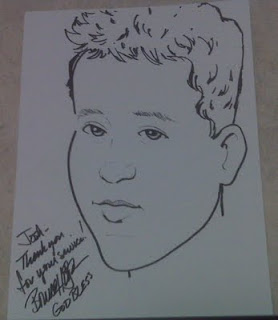 Dave Wege called me this afternoon with an update. I've got the first part of the conversation below. I'll post the 2nd part a little later tonight.

[Today was a better day, but last night was rough.] Two liters is a lot of blood, let me tell you. And apparently it was all over the operating room floor, so they must have hit an artery or something. But he stabilized. Today he was in a chair and was in awfully good spirits for what he's been through, although he didn't get to play much PS3 because they kept interrupting him. You had the nutritionists coming in, you had the cartoonists coming in, you know, the guy who does Mother Goose and Grimm did a caricature. So did Garry Trudeau from Doonesbury. [Bill] Keene from Family Circus/Circle. The one guy absolutely nailed Josh, a guy named Richard Kirkland, and there's all kind of these guys here once a month. The one guy drew a picture of Josh with a t-shirt on and the t-shirt said "Boom!" The guy asked, "can you remember what happened to you?" and Josh said, "Yeah, 'boom! and I looked down and said 'Oh crap! My feet are gone!'" They are completely amazed that he is taking it so calmly.

He's angry too. Angry that he can't get up and get moving. He was in a chair today for a while, but a half hour is all they allowed him. At night, Jessi may come back with Jeff and they may get him [out] for a little tour "around town", around the upper floor here. Interesting that he's been through a real rough time here and his PT (physical therapist?) said he's the easiest transfer she's had. Most of these guys are limp as a dish rag. I've also heard that they don't hear a lot of buzzards buzzing from Marines' rooms. They are as quiet as can be. They take it. They use their medication, sparingly. Josh got yelled at for not using his pain medication enough. His biggest complaint was that he was all itchy from shaving. So I went down to the Marine liaison and said, "Hey, they said they were going to shave him for the last eight hours, but they haven't. The gunny sergeant looks around and said, "I've got two electric razors locked up in my drawer. I've saved them for guys who really deserve them."

One of the gunnies down there is a guy named "Strong" from New London. He's from Emmanuel, New London. He looks to be about 25 or so, so he probably knows som of the guys were know, so I asked is he knew Dan Aswege, but he didn't know him, and I don't know how long Dan's been there. Krause was his principal and Krause is still there. It's a small world!

(watch for Part 2 later tonight)
Posted by Unknown at 6:34 PM